The algorithm of profiled matching between users and tattoo artists. In the first 12 months: 200 thousand euros of transactions, more than 10 thousand users and 200 artists.

Inkdome has developed an innovative matching algorithm that helps people find and connect exclusively with the best tattoo artists for their idea.

In 12 months of operation, it has generated more than €200,000 in revenue, created a community of more than 10,000 users and 200 artists, recorded more than 200 positive reviews and caught the attention of a major influencer, Italian footballer Ciro Immobile, who decided to invest in the company. The results show that Inkdome is solving the problems of the industry and that it's time to scale the business model at a national and European level.

The world of tattoos has had a real worldwide boom in the last 5 years. No longer just rock stars or movie gods, today everyone is tattooing: there are more than 60 million tattooed people in Europe and in 2017 alone, the industry recorded 50 billion in global sales.

Over the next 36 months, Inkdome wants to become the #1 guide in Europe for quality, aesthetically impeccable tattooing that reflects exactly the design people have in mind.

With this strategy Inkdome aims to open the doors to several exit opportunities, including the American competitor Tattoodo, with $15 million in funding and still marginally active in Europe, large marketplaces that intend to integrate vertical sectors of interest such as Thg and Internet Brands, or a large cosmetics and supply group (machines, dyes, needles) active in the world of tattooing. 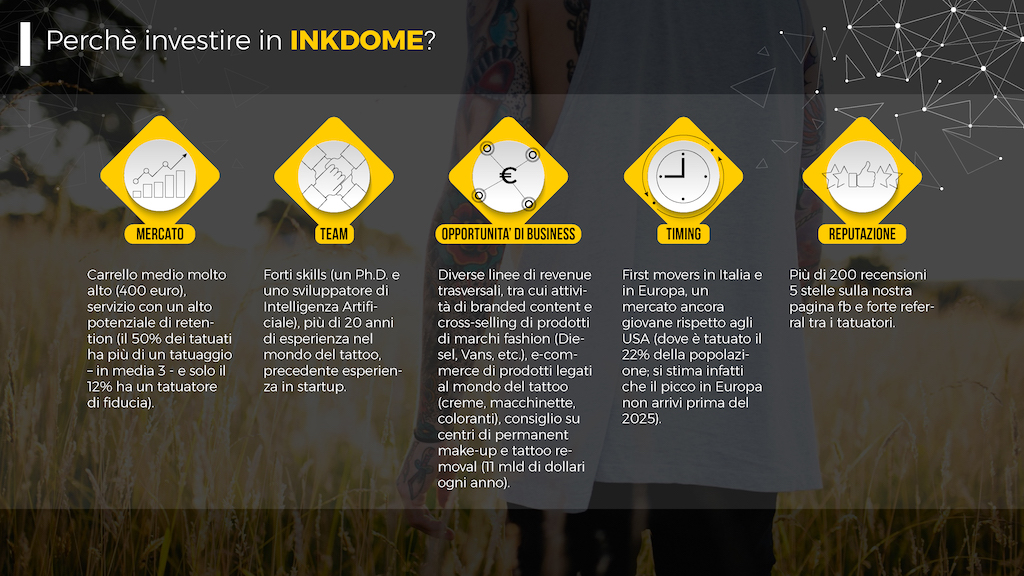