Green Energy Storage is an innovative startup founded in 2015 and composed of a team of entrepreneurs and managers with thirty years of experience.
On the strength of an exclusive agreement for Europe with Harvard University, Green Energy Storage has developed an organic storage system for renewable energy based on quinone, a molecule that is extracted from vegetables and oil waste. The storage systems allow to use the energy produced by renewable sources with flexibility, solving the problem of intermittency of the sources and reducing costs.

In just 3 years, Green Energy Storage has developed and is commercializing a product, making a journey that major competitors have made in 8-10 years. In the last two months of 2018 it has concluded orders for 400 thousand euros and the turnover of the first month amounts to about 100 thousand euros.

GES is the only reality in the world to develop a storage system based on an organic molecule.

(Batteries of the first pre-commercial series in operation at the Budapest site).

Around this project, which starts from a discovery of Harvard University, Green Energy Storage has gathered the best Italian and international excellences, signing partnerships with the University of Rome Tor Vergata, with the Bruno Kessler Foundation of Trento, with DIFFER, the Dutch research giant, with ICL, the Israeli giant of chemistry and with leading companies such as Manica, Sorgenia and Romande Energie.

In the last year the team has further grown thanks to more than 10 young talents, some of whom returned from abroad to join GES. 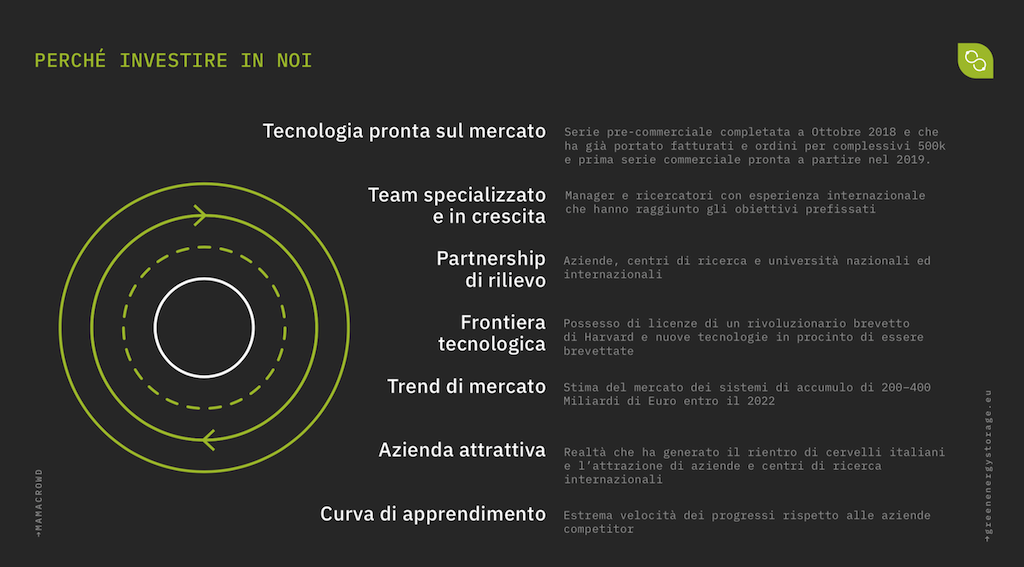