The Digital Menu that works on Marketing and Online Sales, the ALL-IN-ONE solution to digitalize the world of catering.

Founded in 2018, Dishcovery is a startup specializing in digital tools for the restaurant world. It positions itself as an ALL-IN-ONE solution capable of managing the digital menu,e-commerce for the online sale of dishes and a marketing platform for promotion and loyalty campaigns. It offers its solutions in the form of monthly, six-monthly or annual subscriptions that include the use of the platform in a modular formula.

The company already works with more than 4,000 restaurants. In addition to being present within the best restaurants in Italy, such as Osteria Francescana and Pepe in Grani, Dishcovery has undertaken important collaborations with large multinationals in the Food & Beverage world to accelerate its growth. Among these, Coca-Cola and ABInBev, which distribute Dishcovery digital menus to their customers in the HORECA world.

On the Dishcovery campaign is active the Massive Rubrication Service. The service is free for the Investor as the costs are borne by Dishcovery.

In the last 18 months, the world of catering has undergone massive changes. Businesses in this sector have been forced to close during lockdowns and convert their sales and marketing activities from the physical world to online. Especially independent and family-owned restaurants are the ones that have been least prepared to deal with this digital revolution. According to a research conducted on restaurateurs at the end of 2020 by TheFork, 72% of businesses have started to approach digital solutions since 2020. Also according to the same research,80% of restaurateurs surveyed declared their willingness to continue using digital solutions for delivery and takeaway.

This great growth is not without its problems. In fact, this overdose of digital solutions has brought confusion to one of the least digitized sectors in Italy. The number of solutions for delivery platforms, digital menus, contactless payments has multiplied causing great confusion in the industry. In addition to this, the costs and commissions of the main delivery platforms, which reach up to 35%, have put several HORECA activities in difficulty.

Dishcovery is proposed as an ALL-IN-ONE solution that allows the restaurateur, not only to manage its digital menu but also its e-commerce platform without any commission on sales. In addition, it offers tools that allow the operator to manage the data of its customers in order to make direct promotion towards them.

DIshcovery is today one of the most widely used digital menus in Italy. The restaurants that use digital menus have gone from a few hundred in the early 2020s to more than 4000 today.

The company was chosen by the venture capital fund Primo Ventures in 2019 closing a first seed investment and in 2020, during the crisis related to covid proved the anti-cyclicality of its model, recording a +560% on turnover compared to 2019. The technology can cater to both traditional restaurants and pizzerias as well as top-tier restaurants such as Cracco or Massimo Bottura's Osteria Francescana.

In recent months, the company has undertaken important collaborations with large companies in the beverage world, such as Coca-Cola and ABInBev. Today, these companies and many others distribute Dishcovery in thousands of locations throughout Italy. 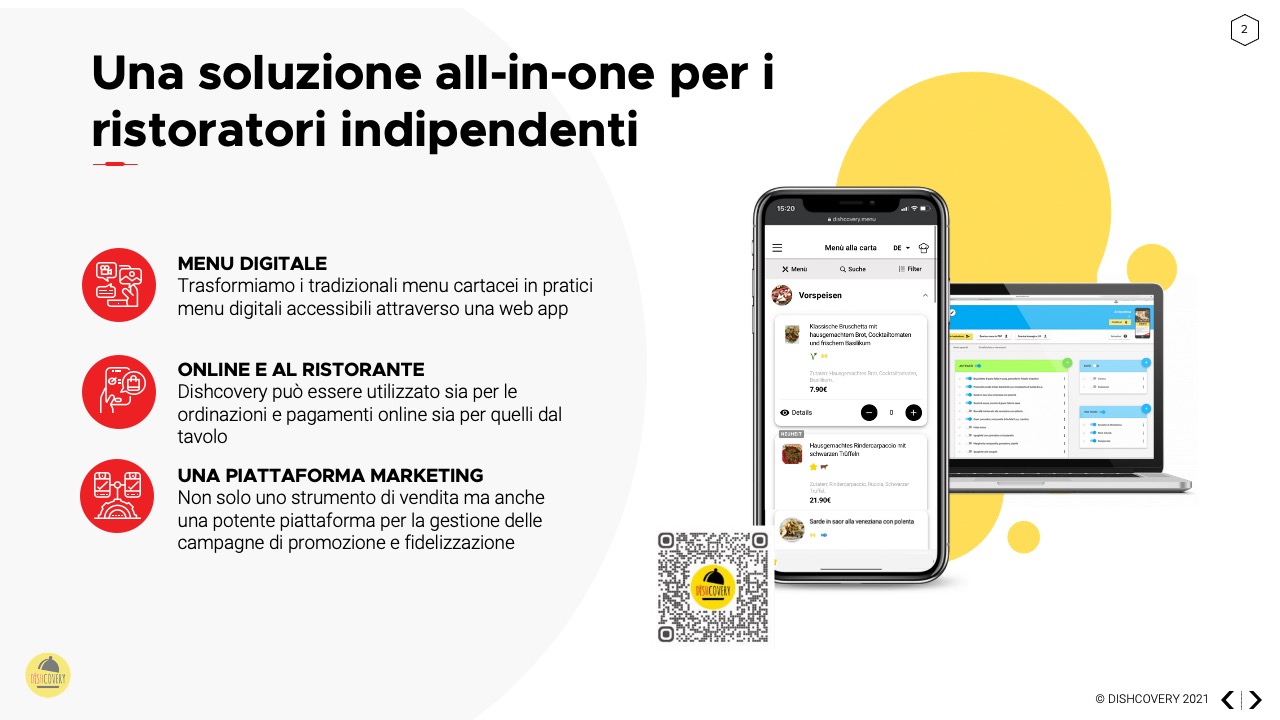