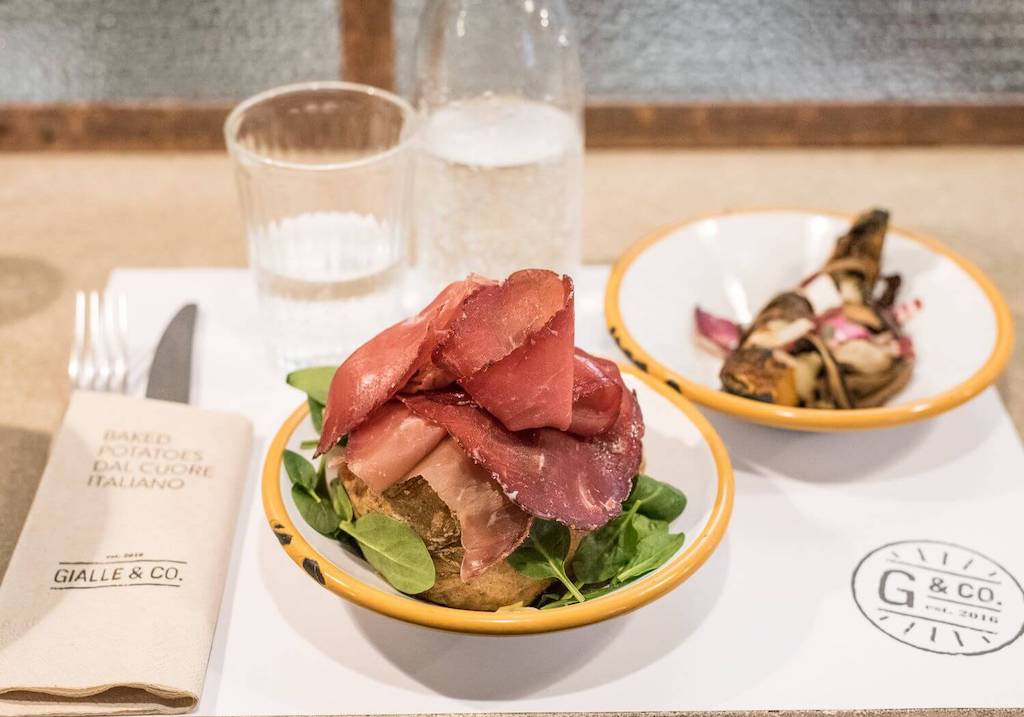 A Yellow for all tastes

A signature dish of the UK, US and Scandinavian countries, the baked potato is one of the most popular foods in the world for its versatility and ease of pairing.

Gialle&Co . is the startup that has re-invented the baked potato, combining the values of authenticity and Italian creativity, to launch a unique product on the market, in restaurants with a strong and recognizable brand.

Using the potato as a culinary base has many advantages, first of all its malleability: the potato adapts to all recipes, from the most classic to the most innovative, enhancing flavours thanks to its neutral taste and creamy texture.
Gialle&Co. is also experimenting with the use of the purple potato, the American potato and other lesser-known varieties to make the menu increasingly varied and appetising.
In addition, the product proposed by Gialle&Co. is absolutely in line with the needs of different types of allergies and intolerances, such as celiac disease and lactose, and vegetarian and vegan diets, greatly expanding the potential customer base in today's restaurant scene.
Finally, the potato has a minimal impact on the cost of the dish and allows us to maintain an overall food-cost per dish well below the sector average.

In the Gialle&Co. restaurants, the potato becomes the vegetable base on which a complete, tasty and fun dish is built, according to the seasonality and standards of excellence of Italian cuisine.

Customers can taste a selection of 15 seasonal recipes, offered in two versions (the classic 350 gram "Gialla" (yellow) and the "mini Gialle" (yellow) for a social, fun and dynamic tasting), in a unique environment that reproduces an urban vegetable garden with its characteristic elements including a greenhouse, stone tables and counters, a fountain and a wooden niche that acts as a casket for original utensils.

The study of trends in the food retail sector in recent years has revealed a twofold market trend: on the one hand the customers' desire for experimentation, and on the other the search for familiar and safe flavours.
Customers want to have the chance to taste a new dish but at the same time find familiar and reassuring tastes.
Just as pizza and hamburgers have been revisited in a gourmet logic with niche ingredients, the baked potato of Gialle&Co. is proposed as a new but reassuring product.
The customer varies in terms of age (from 25 to 55 years old), taste (seasonal, vegetarian, vegan, for celiacs, ...) and spending power (low prices for dishes ranging from €7 to €11).
From the young people who post photos of the dishes on social networks and appreciate the international inspiration of the proposal, from the family that finds variety for all its members, to the more mature person curious to try something new without abandoning the security of tradition or the authenticity of the dish.