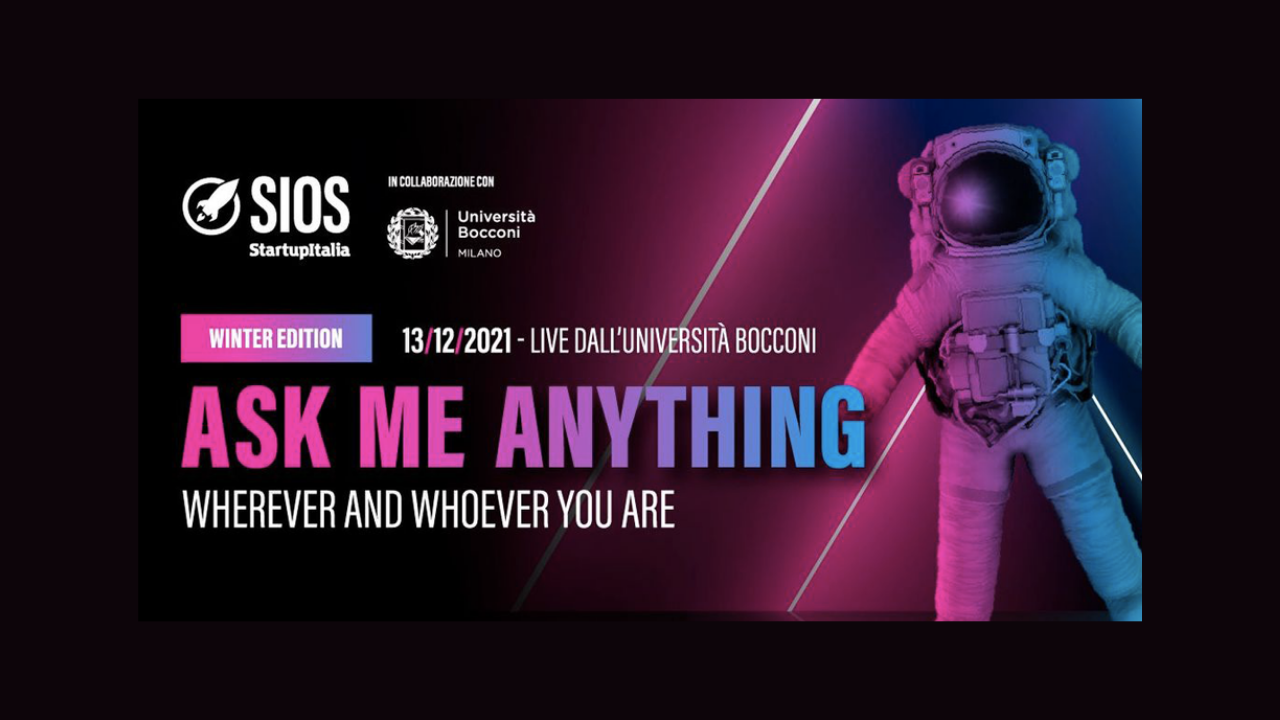 The last Startupitalia Open Summit for 2021 was held on December 13, with the traditional Winter edition of the event dedicated to innovation and the main startups on the Italian scene.

Ask Me Anything, the theme for 2021, after having started its journey in Cagliari, having touched Florence and Giffoni, returns to Milan. The appointment was hosted by Bocconi University and is finally back in presence after two years for a limited number of people, with the possibility of fruition in a "phygital" version, through StartupItalia's social networks and streaming on ANSA.it and LIVENow.

"The SIOS represents an opportunity to create a virtuous ecosystem and a bridge between innovators, companies, investors and policy makers", explains Gianmario Verona, Rector of Università Bocconi. "Bocconi and its accelerator B4i - Bocconi for innovation have taken up the challenge of digital transformation and ecological transition and are at the side of those who have good ideas and want to transform them into businesses."

Startup of the Year Award

As per tradition and reserved for the end of the day, the most awaited appointment of Sios: the awarding of the "Startup of the year", assigned by a jury composed of over 100 experts and insiders.

The winner was Scalapay, a fintech startup operating in the BNPL - Buy Now Pay Later - segment. It raised €155 million this year, reaching a valuation of €700 million. Founded in Milan in 2019, Scalapay is an innovative payment solution for purchases, which allows customers to defer payments in three solutions, without interest.

"The Italian innovation ecosystem is now proving to be more mature and strengthened, it is not just a matter of numbers: we observe, in fact, how more and more foreign funds are concretely supporting the excellence of Made in Italy and how also the regulatory framework is contributing to increase awareness and opportunities. Investments in Italy, if compared to other European countries such as Great Britain and Germany, are still low, but the trend we observe shows how the potential for development is a tangible reality. Entrepreneurs, investors, citizens and institutions follow the sector with attention and interest, as StartupItalia we will continue on our path of promoting a culture that is increasingly widespread in Italy to facilitate the evolution of this sector," said Edoardo Negri, COO of StartupItalia.

In addition to the Startup of the Year award, special awards were given, including that of Mamacrowd which, as has been the case for several years, was a partner of the event.

Mamacrowd's Special Award, which will allow to have a consultation with one of Mamacrowd's financial analysts in order to access to an equity crowdfunding fundraising and a visibility package on StartupItalia's network to be used to support its brand awareness and the campaign itself, was awarded to Artknit Studios, a startup from Biella in the fashion tech sector that deals with connecting Italian knitwear producers with customers all over the world.

Want to find out how to become an active part of Italian innovation?