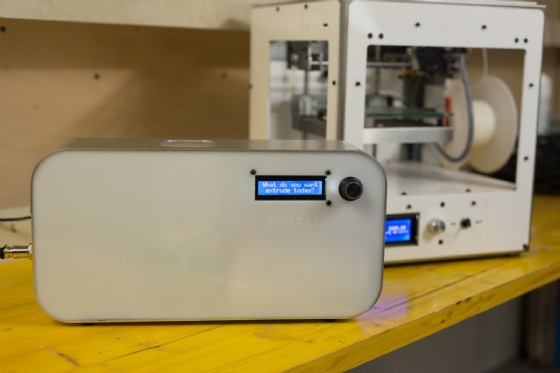 UPDATE OF FEBRUARY 14
Felfil has raised 88,243 euros thanks to 45 new members.Go to the campaign.

A home-printed prosthetic hand. A DIY spare part for household appliances. A building (already a reality in Dubai) and a wheelchair.

These are just some of the scenarios that can be created by 3D printing, the system for creating three-dimensional objects that is driving makers crazy. The crowdfunding campaign of Felfil, the startup that grew up in the network of I3P - the incubator of the Politecnico di Torino - which created the Felfil EVO, the extruder for 3D printers, has been active for a few days on Mamacrowd.

The team was formed on the Ecodesign degree course at the Politecnico di Torino, where it came into contact with the world of makers and FabLabs. It was to solve one of their needs that Felfil EVO, a tool for the autonomous production of material for 3D printers, starting from waste or industrial recovery material..

The 3D printer market market has grown at a rate of more than 100% per year in the last three years. This trend is expected to be maintained until 2019, when the units sold annually will reach 5.6 million. And it is in this market that Felfil proposes its product, which allows anyone to produce their own printing filament while saving considerably on costs. The "classic" spools, in fact, can cost from 30 to 60 euros per kg: while with Felfil you can use industrial pellets, available on the market at 7€/kg. There's more: with Felfil EVO it is possible to create a completely recycled bobbin, inserting in the extruder filaments, misprints, packaging, waste from the printing process. The process is infinitely repeatable and can also be extended to other plastic waste, such as bottle caps.

Felfil has already successfully opened two crowdfunding campaigns in the past that have validated the product on the market: one on Kickstarter (with which it raised 45,000 euros with 102 extruders pre-ordered from all over the world) and one on Indiegogo (with which 23 extruders were sold, a result higher than the average of the other products offered by the platform). In total 125 units of the product have been pre-ordered.

Today Felfil opens to new members on Mamacrowdthe equity crowdfunding platform of SiamoSoci, seeking capital of €50,000. For the first time on Mamacrowd it is possible to obtain a discount on the final product, proportional to the investment. As always instead you can benefit from the 30% tax relief for those who invest in startups as a natural or legal person: the same deduction can be obtained by investing on Parterre, PerFrutto e Gromia, the other startups that have an open campaign on Mamacrowd.